What’s Next for Oil After Saudi Attacks?

On Saturday, September 14th 2019, at 0331 and 0342 local time, two loud explosions rocked the Kurais oil filed and the Abqaiq processing facility. Saudi Aramco, the kingdom’s crown jewel who is currently preparing an initial public offering in order to raise capital for Saudi Arabia to diversify its economy away from oil, owns both facilities. The fires took hours to extinguish and the explosions left both oil facilities with heavy damage which took 5.7 million barrels of supply off the market. This is more than 50% of Saudi Arabia’s current production capacity which stands at 9.7 million barrels and about 5% of total global supply. 5.7 million barrels is also the estimated reserve capacity which has now been taken offline.

Yemeni Houthi rebels, aligned with Iran, have claimed responsibility for the attacks. The Houthi rebels used ten drones to facilitate the strikes, according to their own accounts and have been fighting the Saudi-UAE led coalition in Yemen. While Houthi drone strikes on civilian airports in Saudi Arabia and the UAE have taken place, they lacked the sophistication of this weekend’s attack. According to a UN report, the rebels have required more powerful drone technology which allows them to carry out strikes as far away as 1,500 kilometers. Following the attacks, Brent Crude traded in London surged almost 20% to $72 a barrel which marked the biggest one day jump in its history before retreating to below $66 after the US announced it would release oil from its strategic petroleum reserve (SPR).

The US government released images of the drone damage which shows that the attacks have occurred from the north or north-west or the direction of Iran. Yemen is to the south, but as Iran rejects those claims the Houthis have claimed sole responsibility for the attacks. US President Trump wasted no time to tweet “We are locked and loaded depending on verification, but are waiting to hear from the Kingdom of Saudi Arabia as to who they believe was the cause of this attack and under what terms we would proceed!” 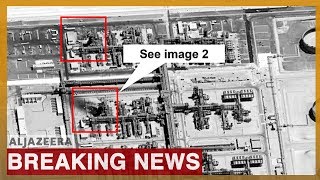 The sophistication of the drone attacks have raised concerns around the globe and so have the locations of the strikes which were designed for maximum damage to the oil supply chain. Abqaiq is the world’s largest oil processing facility and about 66% of all Saudi oil supply is refined and cleansed at this facility. Kpler Oil and Gas Equity Analyst Homayoun Falakshahi added “This is the heart of Saudi Arabia’s oil infrastructure. Because of its importance it is very well protected, under extremely high security measures.”

It appears that US President Trump has already made up his mind and is blaming Iran for the attacks. This basically eradicated the slim chance that Trump would meet Iranian President Rouhani at the UN National Assembly in New York. US Secretary of State Pompeo and Treasury Secretary Mnuchin suggested that Trump is willing to meet Rouhani without preconditions. Following the attacks Trump tweeted in response to those claims that “The Fake News is saying that I am willing to meet with Iran, ‘No Conditions.’ That is an incorrect statement (as usual!)” Adding to the unlikely event of a meeting was commentary by Amirali Hajizadeh, the Head of the Revolutionary Guards Corps’ Aerospace Force. He pointed out that “Everybody should know that all American bases and their aircraft carriers in a distance of up to 2,000km around Iran are within the range of our missiles.”

What’s next for oil after Saudi attacks? Sign-up with PaxForex and allow our expert analysts to guide you through the markets, yielding over 5,000 pips in profits per month!

The global community was quick to release statements in response to the Saudi oil attacks. EU spokeswoman Maja Kocijancic stated in regards to the attacks “We see them as a real threat to regional security, and at a time that tensions in the region are running very high this attack undermines ongoing work at de-escalation and dialogue.” Spokeswoman for the Chinese Ministry of Foreign Affairs, Hua Chunying, added “We call on the parties concerned to avoid actions that could escalate regional tensions.”

Kremlin spokesman Dmitry Peskov pointed out that “We call on all countries to avoid hasty steps or conclusions that could exacerbate the situation, and on the contrary keep to a line of conduct that will help soften the impact of the situation.” Russian President Putin offered air defence assistance to Saudi Arabia and added “We are ready to provide respective assistance to Saudi Arabia, and it would be enough for the political leadership of Saudi Arabia to make a wise government decision, as the leaders of Iran did in their time by purchasing S-300 and as President Erdogan did by purchasing the latest S-400 ‘Triumph’ air defence systems from Russia.” 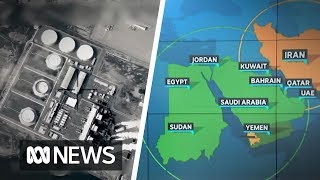 US says Iran attacked Saudi oil refineries, Yemen rebels say they did - so who was it? | ABC News 2:33

Ali Mohsen al-Ahmar, Vice President of Yemen, tweeted “We condemn this blatant assault on economic security and stand with our brothers in the kingdom to deter Iran's malicious arms.” At the same time the Houthis threaten more attacks on the kingdom. Brigadier Yahya Saree, a Houthi military spokesman, noted “We assure the Saudi regime that our long hand can reach any place we want at any time we choose.” Saudi Arabia’s response was that the kingdom “Affirms that it has the capability and resolve to defend its land and people, and to forcefully respond to these aggressions.”

The CCI accelerated out of extreme oversold conditions and also moved above the 0 mark for a bullish momentum change. The mounting bearish pressures are anticipated to result in a reversal below 0. Open your PaxForex Trading Account now and join our fast growing community of profitable forex traders!

The release of the latest RBA minutes failed to pressure the Australian Dollar to the downside and this commodity currency is set to benefit from firmer prices. The AUDCHF is trading just above its horizontal support level with the secondary descending resistance level approaching. Bullish sentiment is expected to suffice for a breakout which will clear a rally though its primary descending resistance level and into its next horizontal resistance area. Forex traders are advised to buy any dips in the AUDCHF into its horizontal support level.

The CCI retreated from extreme overbought territory, but remains in bullish conditions. A reversal in this momentum indicator is expected to lead price action further to the upside. Subscribe to the PaxForex Daily Fundamental Analysis where you can grow your balance trade-by-trade!

The New Zealand Dollar, considered a commodity currency, is more active in soft commodities and the Japanese Yen is a safe haven currency which trumps the commodity impact on the New Zealand Dollar. As a result, the NZDJPY started to move to the downside after touching its horizontal resistance level which is intersected by its primary descending resistance level. Bearish momentum is now anticipated to lead to a sell-off below its primary ascending support level which is moving through its horizontal support area. Selling any rallies in the NZDJPY into its horizontal resistance level remains the favored trading approach.

The CCI has already completed a breakdown below extreme overbought conditions and bearish momentum is anticipated to push this technical indicator below 0 for more downside in this currency pair. Follow the PaxForex Daily Forex Technical Analysis and find out what more traders prefer to grow their balance at PaxForex!