Prime Minister Boris Johnson is facing a key vote this evening in Parliament as rebels from within his own party are expected to join ranks with the opposition in order to thwart a no deal Brexit. The UK is now scheduled to leave on October 31st 2019 and PM Johnson stated that he will not ask for an extension. He vowed to deliver Brexit to the people and honor the results of the 2016 referendum where 52% voted to leave the EU. Most recent polls suggest that the number rose to 56% after Johnson took over as prime minister only a few weeks ago. The EU has so far refused to renegotiate as it awaits how much support the opposition can muster to at least rule out a no deal Brexit.

Johnson has pointed out that the ability to walk away and execute a no deal Brexit gives the UK leverage in negotiations in order to seek changes to the deal which his predecessor Theresa May brought back from Brussels and which was rejected by Parliament three times. In case this evening will see Parliament pass legislation to stop a no deal Brexit and ultimately ask for another delay, Johnson plans to call for snap election on October 14th 2019. He stated “I want everybody to know there are no circumstances in which I will ask Brussels to delay. Let’s let our negotiators get on with their work.” The British Pound came under pressure yesterday, but support levels remain intact as forex traders await the result of this evening’s motion to stop a no deal Brexit.

MP’s, which include high profile rebels from Johnson’s own Tory party, will vote on a bill which gives OM Johnson until October 19th 2019 to reach a deal with the EU and have Parliament to approve it or to ask MP’s to vote on a no deal Brexit. In the event that MP’s will back neither option, the bill will ask for a Brexit extension until January 31st 2019. This is unacceptable to Johnson, but he is trying to negotiate with roughly 20 rebels not to back the bill otherwise they could be expelled from the party. Rather than asking for a delay or negotiate with the lack of a no deal as an option, he prefers an election on October 14th 2019. 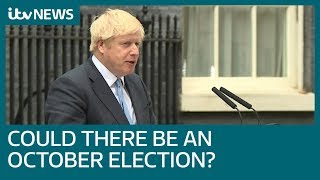 Opposition leader Corbyn favors an election, but former PM Blair has warned his Labour Party against the election trap which is being set by the Tory’s. With Brexit support on the rise, it could tilt the power more in favor of Johnson which is why he is open to such a move. Theresa May tried to increase her base with snap elections, but saw the Parliamentary majority shrink. Since then the Tories relied on support from the DUP to have a majority in Parliament which now shrank to just 1. Will a snap election deliver the result PM Johnson needs in order to deliver Brexit by October 31st 2019? He remains confident and noted that “We’re leaving on 31 October, no ifs or buts.”

Did you know that PaxForex is home to one of the fastest growing trading communities of profitable traders in the forex market? Join us today and become one of them!

The cross-party group will introduce their bill this evening in Parliament in order to force a delay in Brexit if no deal can be reached by October 19th 2019. Rebecca Long-Bailey, from the opposition Labour Party, mentioned that “We’ve kept the bill as short and simple as possible in order to appeal to as many MPs as possible.” She has also labeled PM Johnson’s government suspension, approved by the Queen, as “constitutional outrage”. In order to debate the bill today, the MP’s in favor of the bill will try to take control of the House of Commons during today’s session.

Johnson has warned rebels against voting for the bill and threatened to expel them which means they wouldn’t be able to run as Tories should there be an election. Former cabinet minister David Gauke pointed out that “They seem quite prepared for there to be a rebellion and then to purge the rebels from the party. Their strategy to be honest is to lose this week and then seek a general election having removed those of us who are not against Brexit, not against leaving the European Union, but believe we should do so with a deal.” Will Tory rebels thinks twice before joining the opposition? 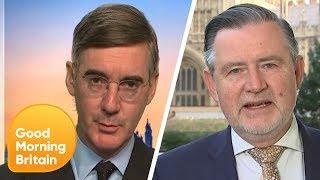 Opposition leader Corbyn claims that he is ready for an election and told reported that “I will be delighted when the election comes, I’m ready for it, you’re ready for it, we’re ready for it, we’ll take that message out there and above all we will win.” Labour’s Dame Margaret added “He is now trying to force an undemocratic Brexit through parliament by threatening One Nation Conservatives with deselection, hinting at a snap election or even allowing aides to say he might break the law by refusing to obey legislation passed by MPs.” How will the British Pound react if the bill passes Parliament this evening? What if it will be rejected?

While the risk of an election has pressured the British Pound to the downside, the moves have been subdued against the Euro which is entangled in its own economic problems. The EURGBP was able to bounce higher off of its primary ascending support level, but the upside is limited to the upper band of its horizontal resistance area where bearish pressures remain elevated. A price action reversal is favored which will take this currency pair through its primary ascending support level back down to its next horizontal support level. Forex traders are advised to sell any rallies in the EURGBP into the upper band of its horizontal resistance area.

The CCI has moved out of extreme oversold conditions and bullish momentum was string enough to elevate it above the 0 mark for a momentum change. Due to the limited upside potential, another reversal into negative territory cannot be ruled out. Open your PaxForex Trading Account and join our fast growing community of profitable forex traders!

The uptrend in the GBPZAR was exhausted prior to the corrective move which took place over the past four trading sessions. This currency pair moved from the lower band of its horizontal resistance area down to its next horizontal support level. He primary descending resistance level has provided additional bearish pressures to the move. Price action started to stabilize now and the GBPZAR is likely to retrace its corrective move. South Africa is facing greater issues with its economy than the UK is facing with Brexit and the potential of fresh elections. Forex traders are recommended to spread their buy orders just above and below its horizontal support level.

The CCI has dropped into extreme oversold territory, but has reached a support zone which previously forced reversals. It is expected that this momentum indicator will once again recover to the upside. Subscribe to the PaxForex Daily Fundamental Analysis and allow our expert analysts to guide you to over 5,000 pips in monthly profits!

Cryptocurrencies offer forex traders a great hedge as price action is more disconnected from geopolitical as well as economic events as compared to any other asset class. Bitcoin was able to advance off of strong support levels and has once again breached the $10,000 level to the upside. BTCUSD is currently trading above its secondary ascending support level, but below its primary descending resistance level. Bullish momentum is expected to suffice for a triple breakout, above its primary as well as secondary descending resistance level and above its primary ascending support level which acts as temporary resistance. This will open the path for a rally back into its horizontal resistance area. Buying any dips in BTCUSD down to its horizontal support level remains the favored trading approach.

The CCI has spiked higher from extreme oversold conditions and this technical indicator also eclipsed the 0 mark for a bullish momentum change. With plenty of upside ahead, the advance is anticipated to extend. Follow the PaxForex Daily Forex Technical Analysis and simply copy the recommended trades of our expert analysts into your own trading account!