PM Johnson managed to get his December 12th election on the second attempt after the Labour party dropped its opposition. This marks only the third-time in modern UK political history that election are held in the winter, but many saw this as the only way to break the impasse. The socialist Labour Party, the pro-EU Liberal Democrats and the Scottish National Party will try to win seats from Johnson’s Tories, but polls favor a big win for the Conservatives. A lot of things can change over the next six weeks and the British Pound will likely face volatile and uncertain times.

Parliament will be dissolved on November 6th as the UK is gearing up for the first December election in almost 100 years. While PM Johnson is rallying the troops, as he did last night at the 1922 Committee of Tory backbenchers, there is quite some concerns within the party about how the election will play out. One MP stated “It’s like a can of paint. Once it’s open, it’s going to splatter everywhere. No one really knows how it’s going to turn out.” Others are worried about Nigel Farage and his Brexit Party which may take enough votes from the Tories. 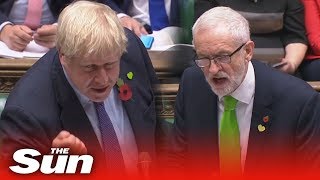 PMQs: Boris and Corbyn battle over the NHS 16:42

Johnson expelled 21 rebels who voted with the opposition, but since restored party membership to 10 of them. Dominic Grieve is amongst the eleven who remain expelled from the party and he vowed to run as an independent. He noted “I will run as an independent. I’ve made that decision. I have no idea what the outcome will be. Logically, I probably ought to lose. It’s a very safe Conservative seat. And if normal loyalties prevail then a Conservative candidate will be elected against me. But I think my constituents are entitled to a choice.” How will events like this impact the results at the ballot box for the Tories?

The leader of the Liberal Democrats, currently polling in third place and far behind Johnson’s Conservatives, remain very confident about their chances to win big on December 12th. Party leader Jo Swinson added “I don’t think that the choice that we are being offered between Boris Johnson and Jeremy Corbyn is anywhere near good enough. Neither of those men are fit to lead our country and be prime minister. And I know there are millions of people out there who are longing for a positive alternative that is looking to the future. I can’t be clearer, our country deserves a better choice, and I am standing as candidate to be prime minister. The Liberal Democrats have a different positive alternative vision for the future.”

Did you know that you can add a second revenue stream as an affiliate? PaxForex has the best offers for affiliates and IB!

Corbyn Promises Socialism for All

Corbyn further added “This election is a once-in-a-generation chance to transform our country, take on the vested interests holding people back and ensure that no community is left behind. When Labour wins, the nurse wins, the pensioner wins, the student wins, the office worker wins, the engineer wins.” It is the same message he used during the last election which cost then PM May her majority in Parliament, Labour currently polls well behind Johnson’s Tories. 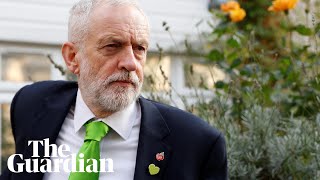 In respect to Brexit, Corbyn noted “The Prime Minister wants you to believe that we’re having this election because Brexit is being blocked by an establishment elite. People aren’t fooled so easily. They know the Conservatives are the establishment elite. We’ll go into office and immediately open negotiations with the EU on a sensible relationship with Europe.” Labour has plenty of constituencies in support of Brexit.

As the US economy extends is slowdown, the GBPUSD is expected to further advance. Price action already completed a breakout above its horizontal support area and above its primary descending resistance level. A Tory majority in the House of Commons is expected to deliver Brexit which help this currency pair to move above its horizontal resistance level and back into its horizontal resistance area. The CCI is trading in extreme overbought conditions, but recorded a new high. Open your PaxForex Trading Account now and join one of the fastest growing trading communities in the forex market!

Forex traders who seek a short selling opportunity can find it in the GBPCHF. After this currency pair moved from its horizontal support area into its horizontal resistance level, a reversal down into its primary ascending support level is expected to follow. Bearish pressures are boosted by its primary descending resistance level and the Swiss Franc is expected to strengthen as the global economy continues to cool. The CCI is favored to complete a breakdown from extreme overbought territory. Subscribe to the PaxForex Daily Fundamental Analysis and earn over 5,000 pips per month!

Another good buying opportunity is present in the GBPSGD after this currency pair advanced above its primary descending resistance level. Bullish momentum is expected to result in a breakout above its horizontal resistance level from where price action can advance into its horizontal resistance area. The CCI is trading in extreme overbought conditions, but likely to drop below the 100 mark before pushing towards new highs. Follow the PaxForex Daily Forex Technical Analysis and grow your balance trade-by-trade!