A trade deal between the US and China is very unlikely as high-level trade talks will be held today in Washington. News that talks have stalled during yesterday’s mid-level talks and that the Chinese delegation led by Vice Premier Liu He may return back to China today, instead of staying until tomorrow which was the original plan. It remains unclear what will happen, bit both sides are aware that a deal cannot be reached. In order to safe face on the global stage and extend negotiations a mini-deal may be announced. The currency pact which is now being touted as a possible first step has been drawn up in February of this year before talks collapsed, so this is not any sort of breakthrough.

Deputy level talks have made no progress and a currency pact would potentially delay planned October 15th tariffs. Details of the currency pact have not been made available, but sources say it is a combination of what the US agreed with Mexico and Canada as well as transparency commitments agreed on by the G-20. The US want to prevent China from lowering its currency in order to negate the tariffs it applies and the US Treasury labeled China a currency manipulator in August. The next review on forex policies of major trading partners is set to be released in roughly two weeks. 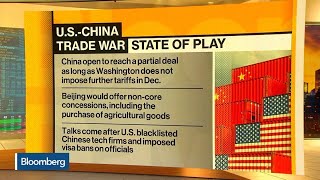 President Trump has ruled out striking a partial trade deal, but he may have to change tactics. He stated “My inclination is to get a big deal. We’ve come this far. But I think that we’ll just have to see what happens. I would much prefer a big deal. And I think that’s what we’re shooting for.” Given the horrific deputy level talks which essentially repeated a pledge that China will buy more agriculture if new tariffs will be delayed, the currency pact may be announced. The implementation of it remains a sticking point as both parties remains divided on the enforcement of such a pact.

US Blacklists 28 Firms Prior to Trade Talks

The Trump administration has created a negative atmosphere before high-level trade talks began by blacklisting 25 technology firms while also issuing visa bans on Chinese officials and Community Party members for the detention of minority Muslim groups in Xinjiang province. As a result, the currency pact mini-deal appears the only one which can be worked out. In regards to the currency pact, US Trade Representative Robert Lighthizer stated in a February 27th congressional testimony that “There’s no agreement on anything until there’s agreement on everything. But the reality is we have spent a lot of time on currency, and it’ll be enforceable.”

Earn more pips per trade at PaxForex thanks to excellent trading conditions, sign-up now and boost your profits!

The Chinese embassy in Washington rebuffed claims of human right violations as “made-up pretexts” in order to interfere in China’s internal affairs. It also denounced the visa restrictions issued by Washington. US Secretary of State Pompeo added “We're going to continue to talk about these human rights violations.” According to the US Commerce Department, the 28 companies it added to its blacklist engage in “repression, mass arbitrary detention, and high-technology surveillance.” According to China, the camps in reference to human rights violations are “vocational training centers” aimed at integration into Chinese society.

The toxic atmosphere created by the latest moves out of Washington before the start of trade talks make nay major deal unlikely. Sherry Madera, former Minister-Counsellor at the British Embassy in Beijing noted “I think both sides have an impetus to get to that table. The question is whether there can be a mini-deal that comes out of it. Certainly nothing comprehensive.” This is the most likely outcome and one markets have accepted. A currency pact, a delay in additional tariffs and China purchasing more agricultural products. 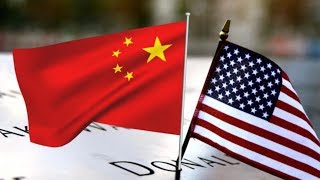 Failure to even announce a mini deal is expected to result in a massive sell-off and the increase of existing tariffs on $250 billion worth of Chinese goods from 25% to 30%. China is expected to retaliate. According to Matt Gold, former Deputy Assistant US Trade Representative, Chinese President Xi is ready to wait out the Trump presidency before striking a trade deal with the US. Gold added “He wants to see Donald Trump fail and he's willing to dig in his heels to make it happen.”

The Australian Dollar is advancing on the back of hopes that a currency pact will be announced. The AUDSGD is currently in the process of completing a breakout above its horizontal support area from where price action is anticipated to advance into its primary descending resistance level. The CCI has formed a positive divergence and this momentum indicator already moved out of extreme oversold conditions. Open your PaxForex Trading Account and join one of the fastest growing communities of profitable forex traders!

The issues in Hong Kong are here to stay until China will decide to take a much harder stance. The Hong Kong Dollar is expected to weaken as a result as the country is heading towards a potential recession. The EURHKD completed a breakout above its horizontal support area and is now expected to complete a second breakout above its primary descending resistance level. The CCI moved into extreme overbought territory and forex traders are recommended to buy any pull-backs. Follow the PaxForex Daily Fundamental Analysis and earn over 5,000 pips per month!

South Africa is facing economic challenges, but the US issues are slowly catching up. The USDZAR was just rejected by its horizontal resistance zone and forex traders are now expected to take profits after a strong rally. This is favored to lead to a breakdown below its primary ascending support level and into its next horizontal support level. The CCI has retreated from extreme overbought conditions and a bearish momentum crossover is expected to follow. Subscribe to the PaxForex Daily Forex Technical Analysis and grow your balance trade-by-trade!