Mario Draghi will chair his last ECB meeting today and leave the European Central Bank divided like it has never been before. His actions as ECB President will have an impact on the Eurozone long after her has moved on. Some credit him with saving the breakup of the Euro, but history will be the judge if he may have started the total destruction on the it. The economy remains fundamentally weak, the risk of deflation elevated and the fiscal outlook unstable. All this while Draghi has ushered on the era of negative interest rates in the Eurozone. October 31st will be his official exit date, his often quoted mandate of price stability has resulted in failure and split the ECB Governing Council in regards his strategy.

While a growing number of market participants started to turn bullish on the Eurozone, based on hope that Germany has reached a bottom, today’s PMI data pointed in a different direction. The Services PMI decreased further while economists predicted an expansion as compared to September, the Manufacturing PMI remained deep in contractionary conditions and the Composite PMI remained depressed. The downside surprise out of Germany was countered by a rare surprise out of France. 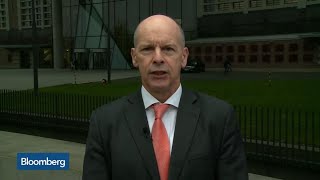 ECB Should Consider Having a Mid-Term Inflation Target, Economist Says 4:16

The French Services PMI expanded and clocked on well above expectations while the Manufacturing PMI ticked up which allowed for an overall stronger Composite PMI. While France outperformed in October, it was not enough to counter the German disappointment and all three Eurozone sub-PMI’s came in weaker than expected. The Eurozone Composite PMI is barely hovering above contractionary territory and the ECB’s only response appears to print more money and cut interest rates. Since the beginning of QE, this strategy had little to no positive impact on the economy.

The Three Words which Define Draghi Era at ECB

Draghi has often repeated his favorite three words “Whatever it takes.” While many will remember him by these three words, Draghi takes full credit for the job recovery in the 19-member Eurozone which added 11 million jobs. This is how Draghi tries to justify his monetary policy. He failed on his mandate of price stability, the Eurozone economy is struggling with Italy faring the worst if Greece and Cyprus are ignored, and inflation clocks in at an annualized average of 1.2%. Never mind the future problems Draghi’s monetary policy have created. As with his counter parts at most central banks, he has failed to deliver and walks away taking credit for whatever he can.

Online forex trading remains the most popular segment of the global financial market, sign-up now with PaxForex and earn more pips per trade!

Natixis economist Dirk Schumacher is looking for Draghi’s assessment of the ECB division. He noted “It will be interesting to get a sense from Mr Draghi how divided the Governing Council remains at this stage and to what extent this will limit, in his view, the ECB’s room for manoeuvre going forward.” Societe Generale economist Anatoli Annenkov added “From Draghi’s point of view, he will say the discussions are important and there are differences but as long as there is a majority in favor, those policies are carried out.”

In regards to the positive impact of Daghi’s QE on inflation, 95% of a poll conducted by Reuters stated that it will not help the ECB increase inflation to its 2.0% target, September clocked in at just 0.8%. The inability of the ECB to achieve its own targets is an area of concern. The Eurozone economy depends on exports, led by Germany, which has underperformed and led the bloc lower, but Draghi has called for governments to increase spending in order to help his strategy succeed. 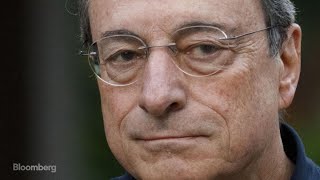 Draghi: the Words and Actions Which Defined His Tenure 1:49

The German finance ministry sees no fundamental problems yet and refuses to violate its own constitution in order to assist the ECB with a victory. According to draft 2020 budget, spending will rise less than 0.4% of GDP on paper. JPMorgan economist Greg Fuzesi pointed out “The standard assumption is that the impact on GDP is around half of this. Hence, the amount of easing remains relatively modest for now.” Societe Generale’s Annenkov added “Unfortunately Draghi won’t have a track record on inflation, but he does have one on employment growth. His sign-off message is likely to be that things would have been much worse had the ECB done less.”

The Eurozone economy is weakening and the rally in the EURUSD is expected to retrace its advance, especially after the release of US economic data later today. This currency pair reached its horizontal resistance level and the secondary descending resistance level is also pressuring price action to the downside. A double breakdown, below its primary descending resistance level and its primary ascending support level, is expected to take the EURUSD back into its horizontal support area. The CCI already completed a breakdown below extreme overbought territory. Open your PaxForex Trading Account and join one of the fastest growing trading communities in the forex market!

The forced Brexit delay which UK PM Johnson has to ask for with an unsigned letter has increase the prospects of an election. The EURGBP is expected to suffer the consequences and allow the weak Euro to rally against an uncertain British Pound. The EURGBP is currently trading inside its horizontal support area from where a breakout is favored to take price action through its primary descending resistance level into its secondary descending resistance level. The CCI has already pushed out of extreme oversold conditions. Subscribe to the PaxForex Daily Fundamental Analysis and earn over 5,000 pips per month!

Uncertain economic times usually benefit the Japanese Yen and after bullish momentum weakened in the EURJPY following its move into the lower band of its horizontal resistance area, a sell-off is expected to take price action back into its primary ascending support level. This currency pair would complete two breakdowns before reaching this level, first below its primary descending resistance level and second below its horizontal support level. The CCI has descended from extreme overbought conditions and is favored to drift lower. Follow the PaxForex Daily Forex Technical Analysis and grow your balance trade-by-trade!