The ink has not dried on the US-China phase-one trade deal, and it already appears to be falling apart on multiple fronts. A multitude of experts warned over the past few months that this trade deal, hailed by US President Trump as a great success, is nothing more than a politically inspired act. It does nothing to alleviate global trade jitters, aside from calling for a truce in the mutual tariffs the two largest economies levied against one another. On the contrary, this trade deal may violate WTO rules and end up costing a lot more than it attempts to salvage.

When the US initially applied tariffs on Chinese imports, Chinese President Xi quickly vowed to defend free trade. Now that the US has pressured a managed-trade outcome, rather than enforcing free trade. This directly violates WTO rules. Phil Hogan, the EU's Trade Commissioner, stated that “We haven’t analyzed the document in detail, but we will and if there’s a WTO-compliance issue of course we will take the case.” 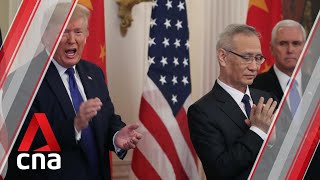 US-China trade deal: A truce in the trade war, says an analyst 3:15

He further added that “We’re not trigger-happy about taking cases to the WTO, we don’t want to create that impression. But we’ll stand up for our own economic interests. It will be interesting to see, is the deal that was announced, is it WTO-compatible?” Even if the EU finds that the deal violates WTO rules, it may take the slow-moving EU months to agree on the next steps to take. This will give the deal plenty of time to collapse on its merits.

The deal calls for China to purchase $200 billion worth of goods and services from the US over two years. At the center of this deal stand $95 billion worth of commodity purchases, and markets doubt the actual amount will come even close to it. The lack of clarity and enforcement of commodity purchases set up more future flashpoints between the US and China and traders should monitor how both sides will utilize the truce to bolster their defenses for a deepening rift. China is known for its patience, and this deal appears to give the rising superpower exactly what is needs throughout 2020.

Do you hedge your forex trading account properly and protect it from downside risk? Find out how to properly secure your forex investment at PaxForex where you can grow your portfolio trade-by-trade!

Several analysts point out that trade was just the tip of the iceberg and the easiest one to tackle. The US and China are on opposing fronts of many different topics, including technology, territorial disputes, healthcare, military, foreign policy, and human rights. All of this resembles a new cold war, and traders should get used to the idea of issues related to the friction. Chinese President Xi urged US President Trump to “enhance mutual trust and cooperation between us.” This may be impossible to achieve, despite the best intentions.

Earlier this week, US Secretary o State Pompeo told technology executives in Silicon Valley that China is posing a series threat to the US. The Pentagon labeled China a strategic competitor in 2018 and both chambers of congress call for support of Hong Kong against China. The US is also selling military hardware to Taiwan, which China sees as a rogue Chinese state. It asked others to stop interfering with its internal affairs, a request ignored by the US. 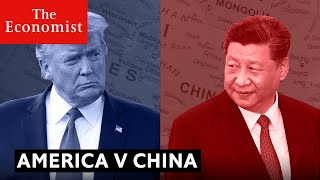 President Xi may have given the clearest sign of where China is headed, after he called for a “new Long March”, referencing the 1934/1935 retreat by the Red Army, which eventually led to the rise of the ruling Communist Party of China. APCO Worldwide China Chairman James McGregor summed up the trade deal by noting that “This trade deal is a good thing if it can reduce tension. But only time will tell if it puts us on a path to finding a way for two incompatible development models to coexist and work together. That is something way beyond the parameters of any trade deal.”

The Singapore Dollar may continue to reap the rewards as the US-China relationship continues to change. The USDSGD completed a breakdown below its horizontal resistance level, with its primary descending resistance level adding bearish momentum. More downside is anticipated to take price action below its primary and secondary ascending support level, and into its horizontal support area. The CCI entered extreme oversold conditions, with more room for a contraction. Open your PaxForex Trading Account today, and join one of the fastest-growing communities in the forex market!

Silver may be the most discounted precious metal in the commodity market, which carries the biggest percentage return potential for 2020. After its primary ascending support level allowed for a breakout above its horizontal support area, bullish momentum is expected to allow for a move above its secondary descending resistance level. This should take Silver to a six-year high above its horizontal resistance level, from where a new breakout can take it into its horizontal resistance area. The CCI retreated from its peak and is now starting to advance into extreme territory with plenty of upside potential. Subscribe to the PaxForex Daily Fundamental Analysis and earn over 5,000 pips per month.

The bull-run in LTCUSD has more room to the upside, after a breakout above its primary descending resistance level as well as its horizontal support level. Miners have flocked back to this cryptocurrency pair, and a new breakout above its secondary descending resistance level is favored to carry price action into its horizontal resistance area. The CCI remains in extreme overbought conditions, and pullbacks should lead to good entry opportunities. Follow the PaxForex Daily Forex Technical Analysis and grow your balance trade-by-trade!